Crumbling Ramparts
A novel by

Crumbling Ramparts is the action-packed thriller sequel to Call to Valor, and has us reunited with Marine Major Sam Hanson.

In the wake of the death of his son, Hanson’s career has improved following the election of President Zachery Plant. He’s been given more authority to search the homeland for nuclear threats.When the news reaches Hanson that Marines are held captive by ISIS in Iraq, it prompts him to lead a daring rescue mission; giving him the strong urge for retaliation.

Bin Laden may be gone but his terrorism thrives. 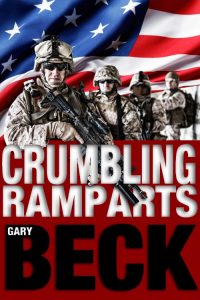 Crumbling Ramparts is a novel in paperback with a retail price of $19.99 ISBN 978-1-387-95411-7 and also in a Kindle version for $4.99 and published by Gnome on Pig Productions.Available now through all major retailers. For info or to request a review copy contact: alexisallinson@gnomeonpigproductions

Gary Beck has spent most of his adult life as a theater director, and as an art dealer when he couldn’t make a living in theater. He has 14 published chapbooks. His poetry collections include: Days of Destruction (Skive Press), Expectations (Rogue Scholars Press). Dawn in Cities, Assault on Nature, Songs of a Clerk, Civilized Ways, Displays, Perceptions, Fault Lines, Tremors, Perturbations and Rude Awakenings (Winter Goose Publishing) The Remission of Order, Contusions and Desperate Seeker will be published by Winter Goose Publishing. Conditioned Response (Nazar Look). Resonance (Dreaming Big Publications). Virtual Living (Thurston Howl Publications). Blossoms of Decay, Expectations and Blunt Force (Wordcatcher Publishing). His novels include: Extreme Change (Cogwheel Press), Flawed Connections (Black Rose Writing), Call to Valor and Crumbling Ramparts (Gnome on Pigs Productions). As part of the continuing series, ‘Stand to Arms Marines’, Gnome on Pigs Productions will publish the third book in the series, Raise High the Walls. Sudden Conflicts(Lillicat Publishers). Acts of Defiance and Flare Up will be published by Wordcatcher Publishing.  Extreme Change will be published by Winter Goose Publishing. His short story collections include, A Glimpse of Youth(Sweatshoppe Publications). Now I Accuse and other stories (Winter Goose Publishing). Dogs Don’t Send Flowers and other stories will be published by Wordcatcher Publishing. His original plays and translations of Moliere, Aristophanes and Sophocles have been produced Off Broadway. His poetry, fiction and essays have appeared in hundreds of literary magazines. He currently lives in New York City.

Gnome On Pig Productions works with an elite grouping of authors, artisans and illustrators to achieve the common goal of success! We are quickly expanding into an international business, reaching across the globe. We are gaining recognition for our high quality, awards and expanding products which include: Books, unique shopping opportunities for products, and many other types of medium.  It is all here for you to explore!
Gnome On Pig Productions is based out of Orillia, Ontario, Canada, but has acquired talented authors, illustrators and artists from all over the world!