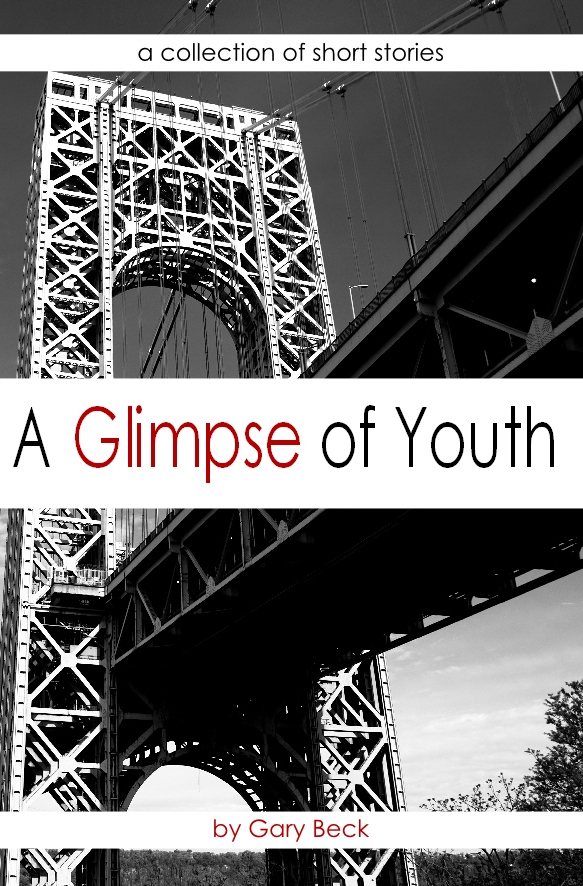 A Glimpse of Youth is a collection of stories about a boy who grew up in the 1950s, in Brooklyn. They explore his early teens when he is still innocent, going camping with his two close friends. He joins a street gang to avoid being beaten by them. His life in the gang includes a camping trip with the gang that ends in disaster. Growing disillusionment with the gang leads to the three friends making a plan to leave the gang. One of them dies in an accident; and in the last story the boy is 18 years old, has left the gang, is going to college and experiences the huge loss of his first love.

Review of A GLIMPSE OF YOUTH, a collection of short stories by Gary Beck, Sweatshoppe Publications,sweatshoppepublications@gmail.com, available on amazon.com, 2013, 130 pages

Gary Beck, a long-time, theater director who lives in New York City, has published a number of books, plays and translations, fiction and poetry. His plays have been produced Off Broadway and toured colleges and outdoor performance venues. In this new book of short stories, he takes us back to his 1950s early teen years, where he starts out innocent and then gets dragged into a street gang “to avoid being beaten by them”. With excellent detail and action, we leave the protagonist, Billy, age 18, at the end of the book, out of the gang, and living on his own for the first time in the city of New York, where he gets emotionally blasted by the death of his first love.

The first story, “First Time Out” is about a hiking trip with some questionable friends his father called “hooligans.” They want to get a boy scout handbook for ideas, but to get one, our own protagonist recommends, “Let’s go to the library and steal the book an’ we can find out now…”

Off on their trip to Fort Lee, New Jersey, the author writes, “Finally feeling like the first heroic Americans who first reached the Pacific Ocean, we found the bridge.” Later he writes, “The forest had a strange aura to city boys, venturing into the wilds for the first time. Unfamiliar bird cries, crackling, rustling underbrush and mysterious shadows had an eerie tenseness for us.” Never mind the child predator that tried to pick them up in his car… They triumph of course,cutting off part of their trip and almost kill one of their own with an ax, thinking he was a bear…

However things get bad in the gang life he soon enters. In “In the City Lost,” Beck writes “Our lookouts came running toward us. Behind them, halfway down the block, was a dense mass of thirty-five or forty boys walking slowly toward us…My hopes for the police showing up disappeared…I rushed towards them, I hit one of them with my belt, and he stumbled off holding his head…” And the battle goes on.

This book would be of interest to people who came from Brooklyn in the 1950s or want an engaging collection about wayward teenagers.

Beck’s chapbook Remembrance, was published by Origami Condom Press. The Conquest of Somalia was published by Cervena Barva Press—a Boston area small press and poetry scene publisher from Somerville, MA. He published many other books as well.

You’ll certainly want to read the last story in the collection, where Billy is out of the gang and looking to work at a book store corporation. He has love at first sight for Kuan Yin, “whose hair fell to her shoulders, amber and subdued. Her glasses portholed the blue chambers of her eyes and concealed the brief elegance of her nose…” They have coffee and a perfect date much too hard for the reader to believe. But disaster strikes. She does not show up at work next time. Finally Billy gets the horrid truth. “Somebody called the main office this morning and told them that she died yesterday. I’m sorry…”

I recommend this book because it is just as well written as many famous authors I have read. You won’t be disappointed.