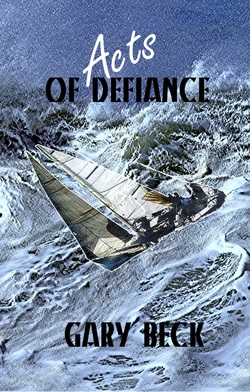 Acts of Defiance explores the lifelong friendship of two boys. When Randy’s father takes a poor city boy, Steve, for the summer, the boys become fast friends destined for great adventures. From persuading a Marine Corps recruiter to enlist them at the age of fourteen to surviving a wild storm under sail, the boys move on to college with a commitment to change the world. For Steve, this means playing by the rules and working within the system. For Randy, this means studying Chinese to read the worlds of Chairman Mao and joining a group committed to overthrowing the international yoke of capitalism in underprivileged countries, preferably by violence. As men, Steve and Randy’s choices lead in opposite directions, but when Randy becomes a wanted criminal, Steve is there to help him. As much as Acts of Defiance is about different approaches to combating prejudice and injustice, it is, at its heart, a story of the enduring bonds of friendship.

With respect to his preceding works, author Gary Beck is well known for his beautifully polished prose, masterful storytelling, and an exquisite sense of timing. He brings all of this to bear on his newest novel, Acts of Defiance, a story of two young boys coming of age during the most turbulent times of U.S. history, including the Vietnam War, the assassination of President John F. Kennedy, McCarthyism, and the American Civil Rights Movement.

With a passion for righting injustice, each of them chooses their own path. For Steve it is one of sit-ins and petitions, community service, and working within the system. For Randy, it is one of dangerous insurrection, where the group of which he’s a member embraces violence and bloodshed.

These different approaches have the potential to drive them apart, particularly when the unthinkable happens and Randy is partly to blame. If reconciliation is to happen, Steve must not only be there for Randy but convince him to turn himself in.