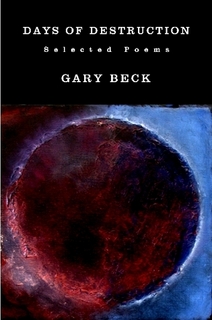 Days of Destruction is a journey through some of the modern horrors that assault our senses in the passionate search for better understanding of our tormented world. The poems explore volatile international issues, the outrages of social abuses and personal anguish, as part of the ongoing events that wear down our tolerance, compassion and will to resist injustice…

By Midwest Book Review on July 7, 2009
Format: Paperback
The world is about more than the joy of life and nature. “Days of Destruction” is a collection of poems about the current problems of the world, including critical issues that affect the culture of America, America’s work abroad, and the suffering so many face. “Days of Destruction” is well worth the consideration for social issues poetry readers. “Rock Star”: After our feeling for the rock stars fades,/where do they go when they are forgotten?/The strumming, stomping, smashed guitars,/the sweat, hot lights, torn clothes/are finally ended./After that there is no message.

MUD LUSCIOUS NINE
a review of Gary Beck’s Days of Destruction by J. A. Tyler

Gary Beck’s poetry is nothing if not direct, and Days of Destruction from Skive Magazine Press is a nice and well-shaped collection of concrete poems, some taking apart violence or money, some echoing the past, and some doing what a poet is perhaps best at: observing.

No longer young,
but not much older than me,
I have seen her often
in subway visions,
ravaged by her treasure
simmering in shopping bags,
her eyes the hunger of zoo animals,
with a wrinkled, worried face
that will not allow tomorrows.

Days of Destruction has a perception of antiquity, a feel of the archaic rendered classical, taking our modern language and twisting it backwards, until it releases its essence, the simplest form of itself.

Somewhere in the South Florida habitat
migration became mostly human,
replacing birds, bees, beasts,
overwhelmed by hotels, motels, condos,
that swallowed a peninsular tract
once the showpiece of a continent,
that allowed coexistence of species
who were not permitted to vote,
were denied government protection,
were encouraged to disappear,
or beg on man made marinas,
another callous testimony
of progress to destruction.

Gary Beck shows us that he does in fact want in, that he is a poet with a harness on words, making of classical and modern language alike straight and clever poetry, building for us this poetic house.

Surrounded by the ripped visions
of my futile dreaming
and the fading intensities
that lingered for a few hungers
and no longer crave glory,
but before my embalming,
endures the hope for completion,
Poetmen, I still may join you.